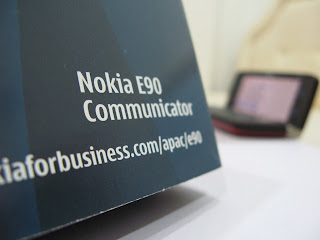 I have FINALLY been able to complete my Nokia E90 review. It has been a month plus of getting to know my E90. Sadly, its also been a month plus since my last review. But, the good news is, I'm done with house moving, and dealing with the paperwork, so I can redivert my attention back to the doing what I love to do. I'll be doing it on a mac from now on. Got rid of my old PC and good riddance to windows.
As an introduction to the E90, I have to begin by acknowledging the Communicator series since Nokia first released the 9110. Then of course came the better improved versions; 9210, 9210i, 9500, 9300 and 9300i, each maintaining its own ground as the flagship model for Nokia. But the one thing that constantly remained with this series; its size. BUT, having said that, hardcore Communicator loyalists still continue to stand by their devices, fiercely protecting and defending their "brick phones" to the very end. Its perhaps because of this niche market consumer that the Communicator series still thrives amidst the many competitors today.

Back to the E90. Its been a joy using such a complete device. Just by my saying that, its probably then quite obvious what my take is on it. I was surprised myself. I've been telling everyone, it has brought back my faith in the Communicator series. Comparing between E90 and 9500, there have been SO many changes and feedback throughout the world. Some bad (very minor) but mostly good responses. So, if you're an existing 9500 owner and you're waiting to take that jump OR, if you're a first time potential Communicator buyer, read on. I hope it helps.

Please note though, there are NUMEROUS reviews out already on the E90, I will try not to regurgitate what they have all mentioned, but I will try give you a more personal hands-on approach in this review. Especially for us here in Brunei. Afterall, I have been spending a month plus with this E90 as my daily workhorse, what else can it do to surprise me? 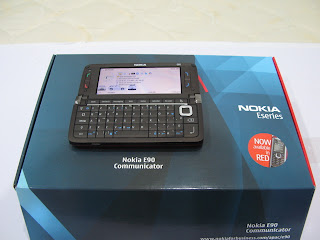 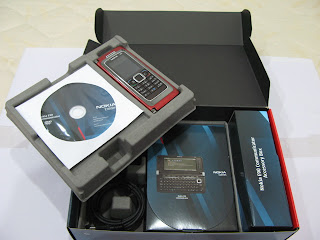 
First Impressions
When the E90 (finally) arrived on our shores, I was immediately notified of it. I still remember the date. 4th July 2007. It was in the afternoon I received that fateful call. Anyway, as you would expect, I rushed to Incomm right after work to get it. I thought I could be the first to own one in Brunei, but alas, another buyer with a red E90 was already sitting there admiring his new purchase. It was not meant to be. Oh well, being the SECOND person isn't that bad I suppose. Given a choice between the mocha or the red, I sat there pondering for a good few minutes. The staff were as helpful as ever, and the decision was unanimous, RED it was. I immediately slipped in my sim card, fired it up (it was a faster start up compared to the other S60 3rd edition devices I've reviewed earlier)(A good sign) and was immediately blown away by the resolution. I remember back when I first used the N80, and was taken aback with the fantastic screen resolution of it. The E90 was just like that, but much better, it was WIDESCREEN. You will never be able to find another device out there with such a glorious display for you to drool over. So right in the shop (I hadn't even paid for it yet), I began going through all the application folders which was easy, since Nokia's S60 menus weren't foreign to me. My first impressions of the E90 was that it was F-A-N-T-A-S-T-I-C.

Physical Aspects / Build Quality
Please see here for my previous photos of the E90 close up. 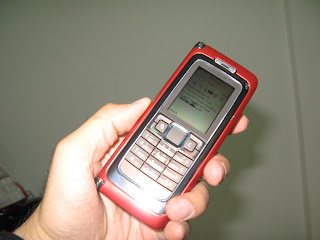 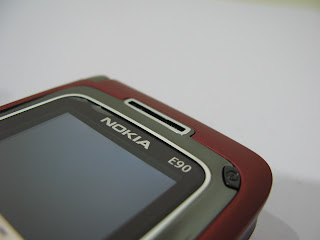 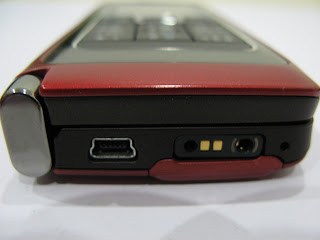 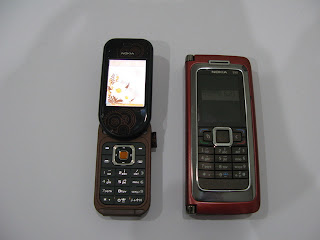 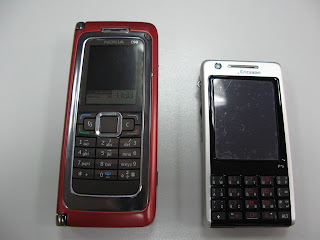 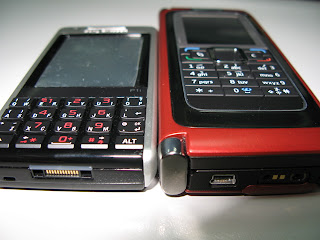 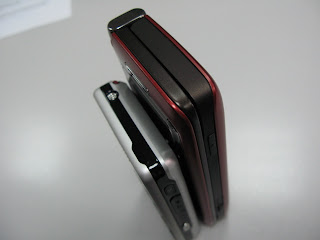 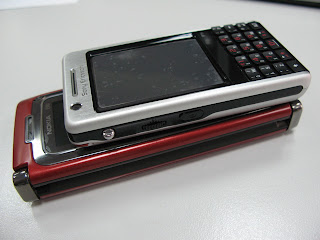 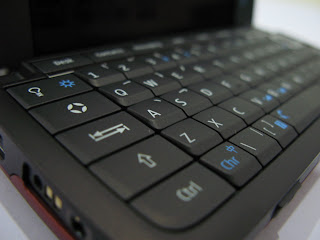 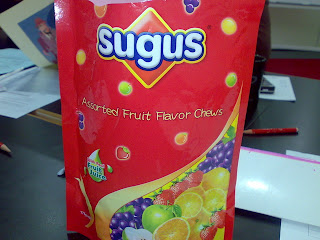 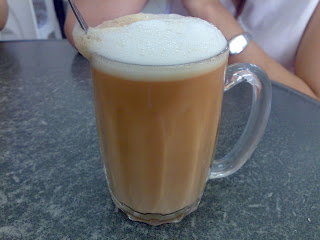 Teh Tarik from a local restaurant 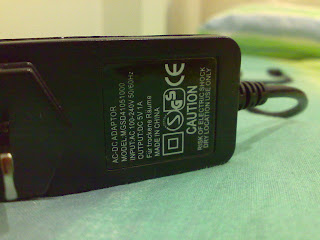 A "macro" shot of a charger in a dimly lit room 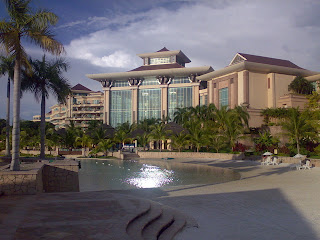 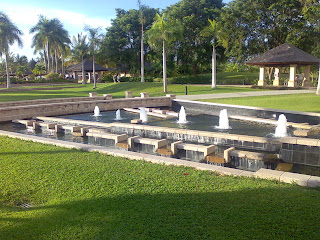 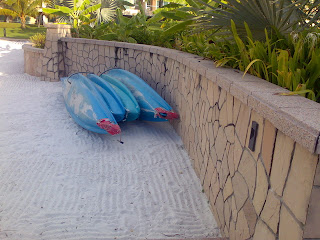 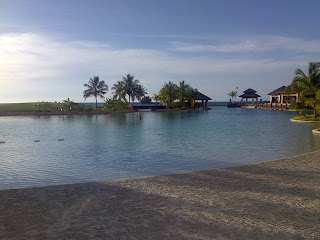 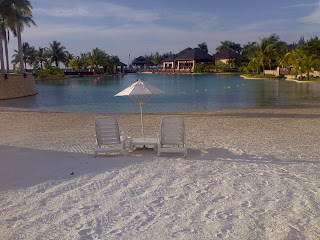 A personal favourite shot.
All these taken from a local Beach resort hotel.
What I loved about the E90

d3xlabs recommendations
As I mentioned earlier, the E90 has brought back my faith in the Communicator series. I was more than often blown away by the capabilities of the widescreen. Sure the OS was familiar to me, but the E90 brings user experience to another level. Being my daily workhorse and weekend warrior, I thoroughly enjoyed using the E90. It was also the cause of many late nights, trying to look online for other cool tips or apps to make me love it more.

So, if you're an existing 9210i / 9500 / 9300 / 9300i user debating on upgrading to the E90 (and you're probably quite used to the size too), I'd tell you to run to the shops right now to get it! You don't know what you're missing by using the slow prehistoric dinosaurs of the previous Communicators. If you're a potential E90 buyer, still sitting on the fence, not able to make that decision yet, there are just TWO factors you need to consider before joining the elite of owners of E90;
Once these aren't an issue for you, again, I'd recommend wholeheartedly for you to go and get one. The Nokia E90 is truly a device that simply does it all. (And one last thing Nokia, PLEASE don't release an "i" version so soon....)

My Nokia E90 rating - 5 stars (yes its that good)
Selling price - BND1438-00
At all Incomm outlets, Brunei's authorised agents for Nokia.
(Remember to use your DST privilege card for better discounts)
Posted by d3xlabs at 11:30 PM

Hello, I am doing a study of the social impact of consumers in Brunei on the introduction of QQeStore for my 4000 word extended essay required for completion of the International Baccalaureate Diploma Program in the International School of Brunei. In order to do so I will have to collect primary data. I was wondering whether you could assist me in being a subject of my research because you have already shopped at the QQeStore. This will not be a long process. I will just have to send you a questionnaire which you will have to fill out and send back to me. Would you be interested in doing so? I would deeply appreciate this. My email is beatrice1711@hotmail.com.

Hi Hakeem, if my review was any longer, it would bore the pants off those already reading it. =p Besides, I think I covered most of the important points. The camera button is a minor niggle, I'm sure Nokia will sort it out, but for now, owners should knw the truth. And yea, i knw its S60 v3 FP1.. still, its S60 v3.. thats my point. Thanks for the compliment tho!

Nice little review here, Dex! I'm actually glad you didn't compare the E90 to any other phone, because quite frankly, nothing else compares :)

Hi rezanator!
I truly agree. There's just nothing out there which compares to what the E90 can do.
hey, I hvnt seen any updates on your end?

Yep, got back about 5 days ago, so been busy with unpacking and setting stuff up. Check out my latest post - put together a quick review of some of my favourite apps for the E90.

Can you do a handbag compatibility test? Will the phone fit in an evening bag (seriously doubt it), medium sized handbags and totes :p Can lend you a few bags if you want hehehehe

hey blackdiamonds, that WOULD be an interesting segment u knw, come to think of it. Ok, I'm willing to do it. Will wait till u return from ur trip b4 I grab bags off ya. Probably in the dark of the night k? Wouldnt want to be seen lugging around expensive designer handbags. Got a rep to maintain u knw!

Thansk for a great review... I agree with most of yr views as i have bought the E90 a couple of months back... Bro, where do i get the white theme you have... one of the most frustrating things about this phone is the backgrounds for entering and reading text that i took for granted on my old 9300...

hi vehrnon, thanks for droppin by! If you shoot me an email I'll hook u up.

You have tested it and writing form your personal experience or you find some information online?

http://technologiesuae.com/#use order upjohn xanax - is there a generic xanax xr

That's awesome, you can download the vintage font at https://yofonts.com/styles/vintage completely free to change it up for your phone. 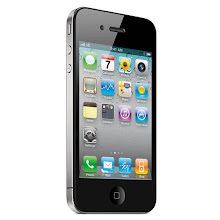 Like the title says, "Everything else is just a toy". Its a passion. Without passion, there is no purpose.